So I have begun my oven build and I have a few questions before I move forward. So for the oven floor I plan on building that using two slabs vs the three and I wanted to make sure my measurements are correct. I have drawn up plans that show my calculated dimensions. Do these look correct for the insulating floor? These are based on using 2x6 forms. Is there somewhere that states the insulating base cutouts exact dimensions? Which oven kit are you building?

Can you send a link or attach a picture of the exact Dry Stall product you are speaking of?

Yes, I am building the Mattone Barile Grande. Here is the product I purchased to mix with the portland cement for my insulation layer. Stall Dry product 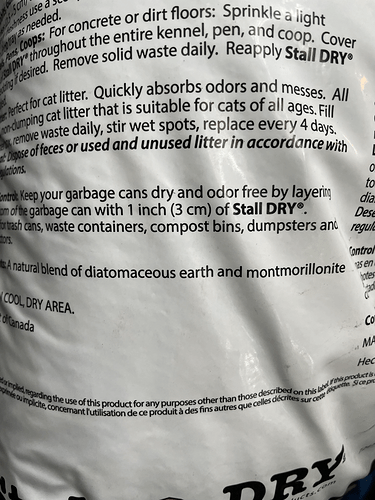 I’m not sure who steered you toward either of these products, but I definitely would not use the Stall Dry product (and the manufacturer would rather you didn’t as well), and I don’t think the Dry Stall product would be suitable either. From the little I can glean about the latter, it appears to have a fine granule size, which is going to do nothing for you regarding insulation.

I would stick with Perlite. It is a non-toxic volcanic rock, which also means it is inert and no chance of somehow contaminating your food. It will also shed water, versus either of the drying products which are designed to absorb and hold on to water. You do not want that latter quality, because it will take a long, long time for your insulating pad to dry (think many days), and you can’t build over it until it is fully cured. Perlite/Portland cement will cure in a couple of days, and Vermiculite/Portland cement in about a week.

Leave these products out in the barn. The Perlite is very inexpensive for your needs, and will do the job.

I appreciate the advice, I have located vermiculite at my local Ace Hardware. I will look for the Perlite but if I must I will go with the Vermiculite.

I will look for the Perlite but if I must I will go with the Vermiculite.

Glad to help. Either will work fine, but Vermiculite requires about 3 times as much curing time because it retains water. Perlite sheds water, which means a much faster curing time.

Here is a FAQ on the two.

If you have a large garden center near you, call them. Perlite is a common soil additive.

I was able to locate some perlite. I wasn’t easy but I scored their last two bags! Now I need to find the hydrated lime. Anyone know which of these would be better?

Mortaseal® Mason’s Lime is a fine-grind, white, high-purity dolomitic lime, fully hydrated for immediate use. When properly combined with portland cement and sand, it creates a lime mortar having superior performance and ageless durability....

I saw type S mortar is acceptable which is easy to locate, but I read that it wasn’t the same as hydrated lime so I’m a little confused on that portion.

Go with either of the hydrated lime products you linked. Same price, your choice.

Where did you see that Type S mortar is acceptable? That may be from another part of the instructions (for example, when building the hearth frame from standard bricks, the high heat mortar mix is preferred, but if you just don’t have enough of that, it is acceptable to use Type S mortar in its place…we’d really rather you use the high heat mix in Steps 2 through 4 because the bricks come in contact with the hot hearth firebrick and Type S will eventually degrade in those areas).

As an ingredient for the high heat mortar mix, Type S mortar mix is not an acceptable substitute for hydrated lime, and overall its uses should be confined to these areas:

Go get your hydrated lime, and save the Type S for the areas I listed. And please, keep asking questions as you go along—this is a process, and there are no dumb questions when it comes to learning something new.

I was researching hydrated lime and it is usually described as “Type S” and I saw a few places mention Type S mortar but I assumed they were different hence my question and hesitation to buy any. I have gone ahead and ordered 2 50lb. Bags from Ace so I can begin the oven next weekend. Thanks again!

Got my slabs up and set onto the base. Each weighed around 500lbs so it was a little tricky but we managed. Next step is my insulation later tomorrow.

Well done, Jeff! They do have some heft, don’t they?

Thanks, got the oven formed up and need to wrap it now. Slowly but surly getting there. You’ve got it going now! That’s some fine arch work. It won’t be long now until you start your curing fires.

Thanks, it’s been helpful having a friend that’s a mason helping me learn the trade a bit. Laying block and brick has been fun to learn.

So I have my first layer of stucco on and it has dried. Most of my mesh is covered, now I plan on using brick veneer over the stucco so my question is. Can I use the layer of mortar that I use to lay my veneer with as the second layer or do I need the second layer and then the mortar for the veneer?

You need the second layer of stucco. The first layer established a base, but it is not strong enough to protect the insulation. The second layer is the bare minimum needed to provide a strong shell that acts as an enclosure for your oven. I’d argue for a third layer as well, but as long as you are using mortar under the brick veneer it will arguably accomplish the same thing.

A strong foundation will give you trouble free veneer.

Right on, I wanted to be sure so I’ll add the second coat and then do my veneer with mortar. Thanks!