Please Help! Too much smoke and oven won't get hot enough

I built the Mattone Barile over a year ago. Although I’ve enjoyed the project immensely, the performance of the oven, or possibly my techniques, have been very underwhelming. Since curing the oven I’ve made pizzas on 6 occasions and the main problem I have is that the oven won’t get past 400 degrees or so and when I try to close or partially close the front with the door the fire immediately starts smoking heavily, and I’ve had a neighbor who has threatened to call the fire department. Last Saturday I had 12 hungry people over for a pizza party. I spent 1.5 hours tending to the fire, using a blower at times to feed it oxygen so the smoke would be minimal, finally got some decent ashes, and the oven wasn’t hot enough to cook the pizzas. I would try to close the door off some to heat it up and the smoke would immediately start getting heavy. I ended up cooking the pizzas in my gas grill, so sad. I don’t know if I’m doing something wrong or if my oven has a major problem, although I followed the plans exactly. I’ve been using dry almond wood and even got a taller chimney but nothing is helping. Any help would be so appreciated! Hello and welcome to the forum,
From your pics I can say you probably just need to work on your fire building technique. In your bottom picture you can see the black soot on the dome which means your fire is not hot enough and you have very little hot coals in the back with no flame… Compare to these pictures. The initial fire has to be big enough and burn long enough to create a nice layer of coals in direct contact with the floor AND burn the soot off the top of the dome near the back of the chimney. Then I push the fire around front to back and add more wood so that the whole oven is getting fired at the same time. Remember to keep some fire and coals up front because those bricks need to absorb a lot of heat. When the soot on the dome in back burns off you are pretty much ready to go though I always confirm the dome temp with the thermometer.

Also you need to have flame while cooking in order to maintain the temp. What you show in your picture would be good for baking bread but not making pizzas. But do not add or adjust wood while there’s pizza in the oven unless you like ash covered pizzas.

Thank you! I did this upside down fire method the last couple times because I read that it produces less smoke (trying to not get in a another fight with my neighbor). But I think you’re right, I basically need more wood and a bigger fire for such a big oven. I think as long as I give it air as needed when it’s getting started the smoke will be kept to a minimum. Thanks again!

One question, does your fire produce a lot of smoke or is that not a problem? As soon as I push my wood towards the back of the oven it starts smoking pretty good…not sure how to get around that.

There’s quite a number of posts elsewhere in the forum about smoke problems so you’re not alone. You need to get the fire going quickly which means using the small twigs and pieces of wood that will light quickly and burn fast (on the bottom as mentioned above).

Another thing that helps is to use wood without the bark on it. The bark and cork contain tannins and other chemicals that make a lot of the smoke.

Sounds like a plan. I probably need to use twice as much de-barked wood early on. I’ve been starting a smaller fire then adding a log here and there. The fire never has a chance to get raging and just smokes out and dies. Excellent advice!

Here is the problem you need a huge roaring fre lots of coals and major flame action
The flame should be so intense that it reaches almost to the door
These barrel type ovens are not as efficient as the dome type. You need to close off the flue make the entrance smaller and get a ripen ass major fire going. Get the flue damper that brick ovens sells and close the entrace with brick by their recommendations

Also your wood needs to be super dry and small. Lots of small splits builds a raging fire
flame flame and more flame. Check out Manna at the devon cooking school ( on you tube) and watch his fire
Biker Bud Matt will confirm that flame and lots of it is key your floor needs to be between
650 to 700 degrees

So, the local supermarket (Kroger) sells small bundles of kiln dried, barkless wood for $6 a bundle. WAY too expensive to use exclusively for pizza making but I found that using one bundle to get the fire going quickly with minimal smoke then adding my bulk wood worked well. Read the package carefully. Some places sell the bundles either not kiln dried or with bark. Avoid those.

Thanks so much for all this! I have the damper for the flue and have been considering closing off the front. I was always worried that less oxygen would cause my fire to smoke too much but maybe if the fire is big enough that won’t be as much of a problem?

Bottom line, looks like I need to go big or go home. Thanks!

Sounds like a great option, I’ll look for something similar at my local stores.

Hi Adam, checking in on this thread (I was traveling when this discussion first popped up and missed the whole thing!). Hoping that anything I add here is moot because you’ve solved your smoke issue, but it’s also useful to add some general guidance.

@kgondoly Ken and @Dinovmakingpizza Dino both are absolutely correct. It may be a little confusing because for curing the oven the watchwords are “low and slow.” But for firing the oven I recommend two steps:

Step 1 is like Ken said: two splits at the base, with lots of space for oxygen, and maybe three larger splits resting on top of them. I’ve had good results with laying those splits out in a “V” pointing toward the back of the oven, and the three larger splits laid across it.

The other key to Step 1 is a steady and sustained ignition source. No newspaper or similar waste materials, and almost none of the various firestarter products on the market—most of them contain petroleum based binders that will contaminate your hearth. I swear by Lightning Nuggets because they are inexpensive, made of sawdust and food-grade wax, and they burn long enough to start hardwood splits without a need for kindling. I put a single nugget at the point of the “V” to get it going. There will be some smoke at this stage, but you shouldn’t see thick white curling streams of smoke and certainly not any black sooty streams. 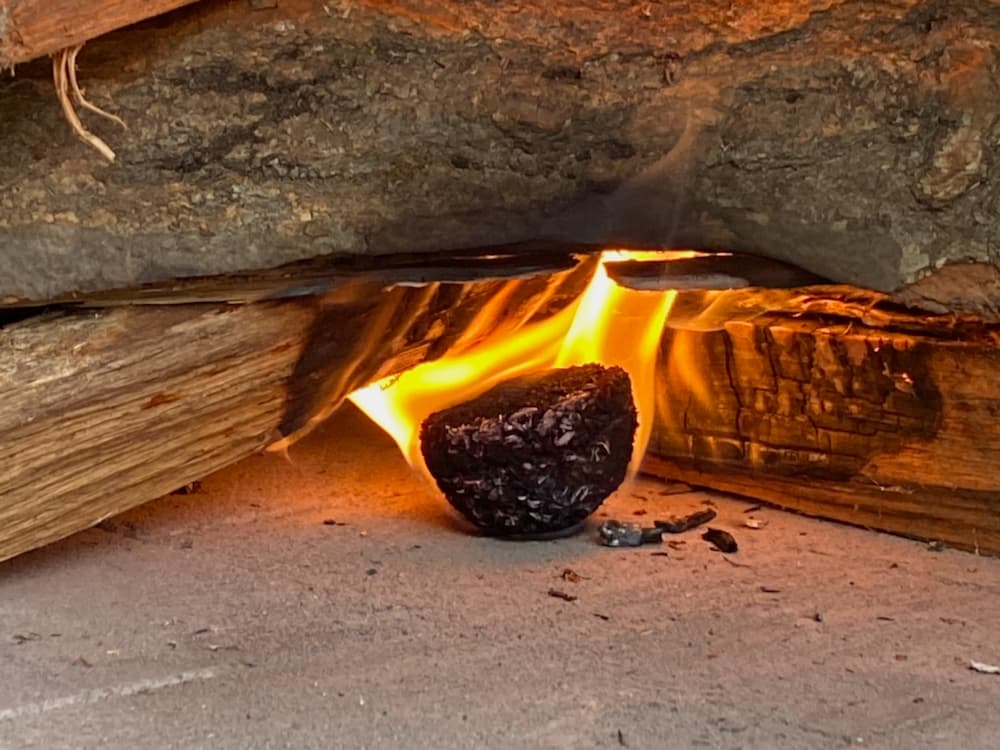 After 20 minutes or so, I start adding more splits. This is Step 2: push the bed of flame back a bit with your long-handled wire brush, add 3 splits on top, and let them get involved. The idea is to draw the flames upward, while drawing in oxygen from below that heats up the live coals and results in more complete combustion. At this point you should have open flames and little or no smoke because you’ve achieved good, hot combustion.

When you’ve done this once or twice more (in my experience about 75 to 90 minutes), your live coals and logs should be in the back of the oven and you’re ready to add a couple of splits to get a rolling flame scooting along the top of the oven toward the chimney.

You can adapt this to the needs of your particular cooking adventure. A single Step 2 move is enough to get a good baking fire going. 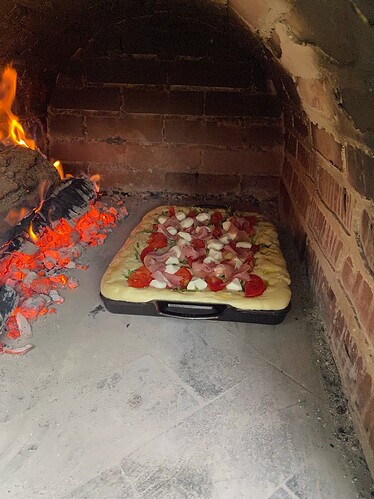 And a sequence of three will give you a roaring flame that’s good for more than pizza. 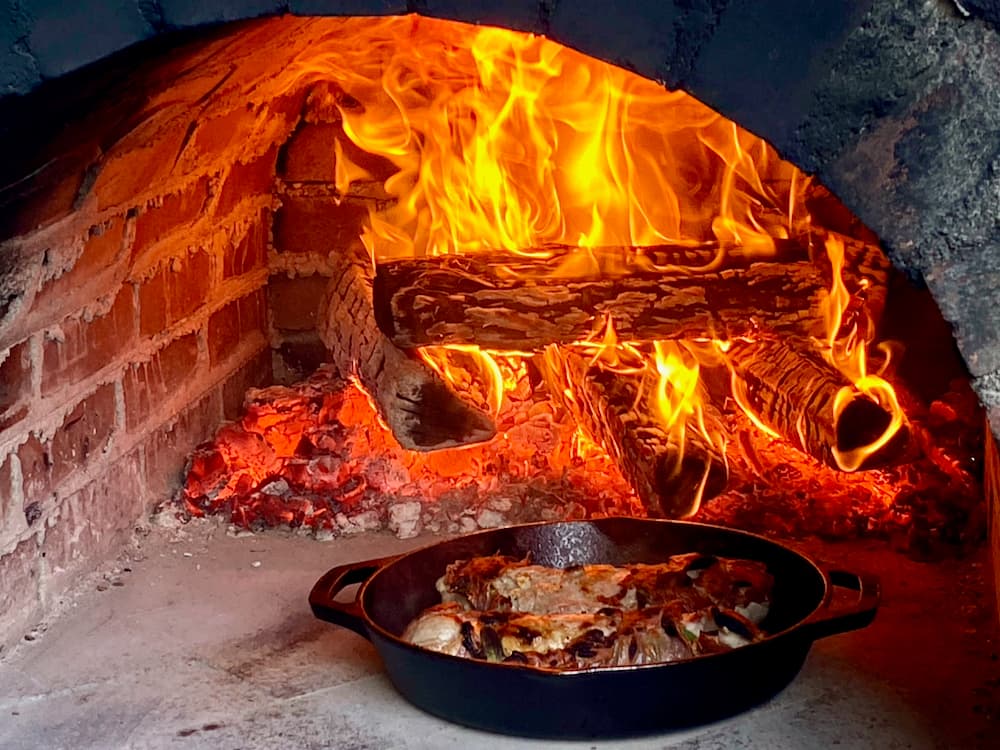 No smoke but aromas that will tame and sweeten those neighbors!